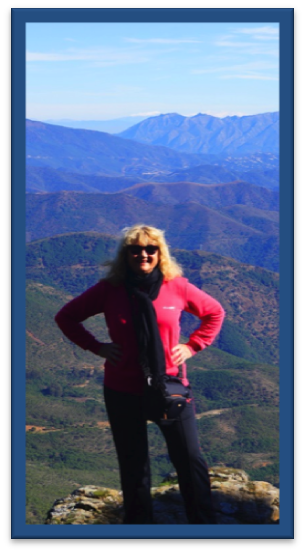 I had the very good fortune to start learning Spanish at school, when I was 14. Almost immediately I felt a great affinity to the language and was fascinated by Spain and everything Spanish, its people, culture, history and traditions. Much of my enthusiasm was inherited from my Spanish teacher, Derek Rich. Gosh, how important our teachers are!

Between my Upper and Lower 6th, Derek organised a trip to Spain for a group of 12 students. With Derek bravely at the wheel, we drove down via France in a minibus, destination Soria, north of Madrid. Fortunate enough to live with a Spanish family and spend a total of 6 glorious, fascinating weeks in this wonderful country, the trip was to give me the impetus and motivation to ensure I got my A levels and go on to University to study the Spanish language. The excitement I felt was palpable, as for the very first time I was able to practise my Spanish. And of course I was delighted when I realised I could understand my newly made Spanish friends who in turn, could just about understand me. This was fun!

Further education took me up to Leeds, West Yorkshire, to Trinity and All Saints Colleges, affiliated to Leeds University, where I obtained a Bachelor of Education Degree in Spanish. A degree in my pocket I had to make my way back to Spain as soon as I could. The British Council gave me the right opportunity, sending me to a Spanish State School as an English Assistant up in Zaragoza, Aragón. I would spend three years in the north east of Spain, teaching English as a foreign language.

In 1982, looking for a career change, I moved down to Marbella to take up the post of Spanish teacher at the English International College, where the English curriculum is taught up to A level.

In the summer of 1983, thanks to the initiative of Don Iñigo de Orbaneja, (whose father Don José de Orbaneja was the founder of the urbanisation Sitio de Calahonda), I began organising Summer Children´s Language Courses, (English to the Spanish children and Spanish to the foreign children), based at the Club La Naranja in Calahonda. Given the success and popularity of these courses Iñigo suggested I might stay on at the Club La Naranja to teach Spanish to the foreign residents.The rest, as they say, is history.

In 1987 I co-opened the Centro de Idiomas de Calahonda, Mijas Costa, where I organised Intensive and Ongoing Spanish Courses for foreigners of many different nationalities and also taught English as a foreign language.

Since 1996 I have made Estepona my new home, where I continue to enjoy teaching Spanish in the Costa del Sol to a wide variety of students from retirees and business personnel to youngsters looking to excel in their Spanish exams! I am constantly striving to improve and develop my teaching methods with special emphasis on making learning Spanish as simple and as much fun as possible.

With this in mind, I´m currently busy preparing the Online version of my Spanish So Simple Language Course – Stage 1 – Beginners, and you will soon be able to download lessons complete with audio tracks and audio-visual flashcards to help make learning Spanish…SO SIMPLE!

In September this year, 2018 I will be celebrating 39 years living in Spain …….. Mmmmmm! …….This place is growing on me…….. Might just stay around a while longer!